Over the past year I have been working on a number of antweight robots of different designs. These include: FireAnt, Omicron, Cyclone and Impact.

The burnt-out weapon motor has been replaced, as has the receiver and BEC. A small piece of plastic has been glued onto the underside of the flipper to stop it getting jammed open by the servo arm. It can also be fitted with a large 2mm thick aluminium bucket scoop which can flip a tin of baked beans (which weighs three times the weight limit) and clamp down on other robots but cannot be used to self-right. These changes have increased the weight to 125g with the flipper and 145g with the bucket scoop. 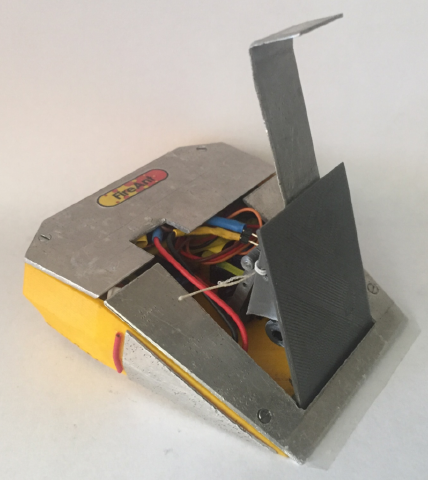 FireAnt has repeatedly proved itself to be a strong competitor, its front-hinged flipper can flip two opponents at the same time, in what has been called a “double flip”. Its agility makes up for the fact that most other robots are faster, and it is very easy to keep the front of FireAnt pointing towards an opponent. The 30-minute battery life often proves pivotal in loner endurance style events where recharging or replacing batteries may not be possible.

Omicron Mk II is a two-wheel drive robot with a wide array of interchangeable hammers and axes. The drive and weapon motors are part of a light yet strong bulkhead assembly with a thick amour “shield” inspired by robots like Terrorhurtz. The baseplate is 3D printed while the armour is made from 1-2mm aluminium. Apart from the weapon servo, the electronics are the same as that of FireAnt. 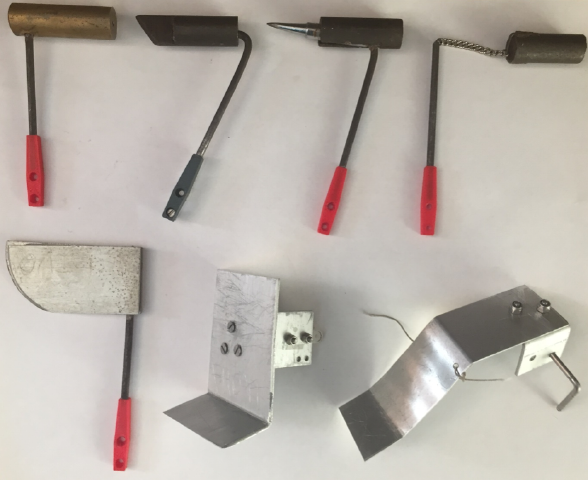 Omicron Mk I was designed to act like a tank, capable of taking large impacts, such as falling off a table, and still function. The base plate was a single piece of aluminium and the robot had high ground clearance on all sides. The side armour was interchangeable depending on the opponent and weapon being used, for example tall armour panels to prevent axes and crushers from reaching the electronics, or armour panels that could rotate so that they were always flush with the ground, defending against flippers. The high ground clearance, inability to self-right and exposed edges of the armour necessitated the changes for the Mk II.

Cyclone is an invertible, two-wheel drive robot with a horizontal bar spinner, loosely based on Robot Wars competitor PP3D. Its weapon is a 25g, 50mm diameter, 4mm thick steel bar with two large teeth mounted close to the ground (known as an “undercutter”), powered by a quadcopter engine capable of spinning at 25,500 rpm, giving an estimated top speed of 150mph.

The teeth of the bar are designed to tear of armour panels and exposed components, while the flat sides can deliver concussive blows. The short reach of the weapon limits its effectiveness and the consequences of it hitting the ground while spinning is unknown. The bar can also be removed and replaced by a large 2mm thick aluminium scoop for pushing opponents around. The weapon and drive can both be independently turned on or off by switches on the transmitter. 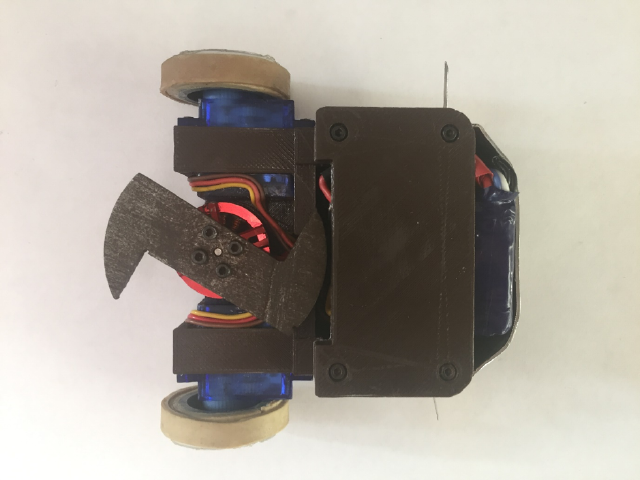 The chassis is a 3D printed monocoque, the electronics sit in a “tub” towards the rear of the robot, held in place by a lid that is screwed in place and sits virtually flush with the ground. The 3S LiPo and removable link are at the rear of the robot for easy access. The wheels are mounted in line with the weapon motor and are fully exposed, each wheel is made up of three layers of elastic bands, which are prone to splitting apart. Two brass paper fasteners hold on the rear armour and stop it being stranded on its side.

Cyclone’s main weakness is its very slow speed, being unable to chase down other robots, it must rely on them coming to it. It is also virtually untested with the spinning bar attached and functioning, the one brief test performed suggests an extremely large of gyroscopic forces are at play, how this will affect mobility is unknown.

Impact is an invertible, four-wheel drive rambot with interchangeable spikes. Its method of attack is to use the speed provided by the 4 10:1 gear motors (the fastest of their type, estimated speed 7mph) to slam into other robots, causing damage and allowing it to push opponents around the arena. It uses tank steering, with each side controlled independently of the other and the slope at the rear allows it to maintain traction if another robot gets underneath.

The body is maybe up of two 3D printed “shells”, attached to each other by six bolts; the four bolts at the corners stick out to help Impact roll over if flipped. The motors are sandwiched between the two shells, with the electronics free floating inside. The only palace the electronics are attached to the body is the connector for the removable link at the rear.

Three spikes can be attached to the front of Impact. Three long spikes for keeping opponents at range, three short spikes for more control when pushing and a “splitter” spike for attacking exposed wheels. Any combination can be used depending on the opponent, for example two long spikes with the “splitter” spike in the middle to better target a specific part of an opponent. 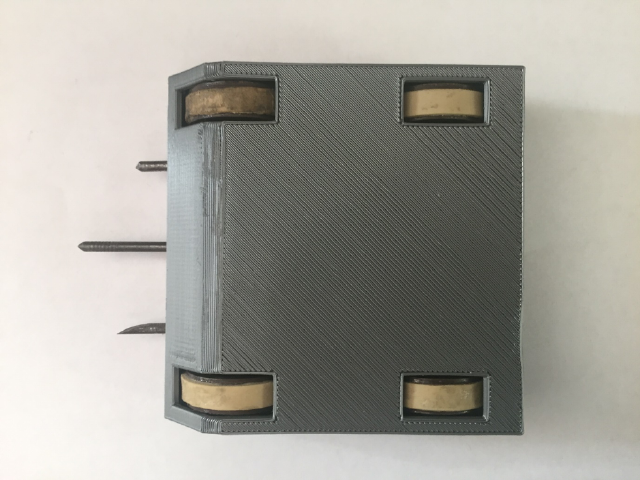 Testing Impact has found its speed and highly sensitive drive make it difficult to control, to the point where it is easier to hit a moving target as opposed to a stationary one. Continually slamming into walls can potentially dislodge the removable link. The 2S LiPo provides approximately 20 minutes of continuous use.