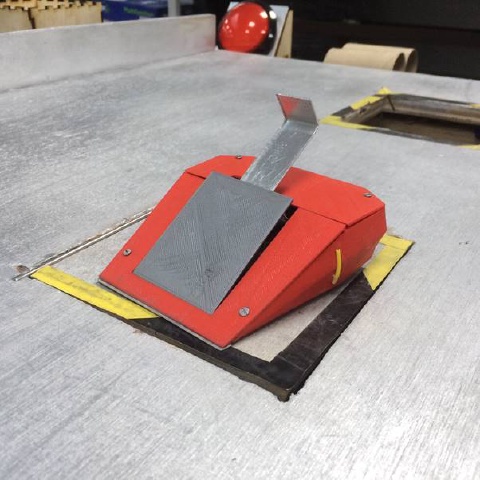 It is armed with a front-hinged true flipper allows it to turn over other robots and right itself if it is upside down. It weights 116g, cost under £50 and is primarily made from 3D printed plastic.

The modifications I made were using elastic bands superglued to the wheels as I was unable to make the correct tires, adding a small strip of metal to the front of the wedge to allow it to get under other robots easier, three small bits of wire I superglued to the sides and back of the robot to prevent it from getting stuck on its sides and adding a large piece of metal on the flipper to stop other robots driving over and to help it self-right. I also split the top plate into tow to make it easier to access the internals. I also added a removable link that when removed, completely cuts the power to the robot, making it safe.

You can see some footage of Fire Ant in an arena test battle with Meme Machine and Loanerbot here.

In the Freshers Faire Event, Fire Ant was the best performing robot, fighting in all three fights, winning the first two and coming a close second in the last fight.

Before its next big fight, I need to replace the servo controlling the flipper as it has burnt out. I am also planning to build an invertible robot with a rotating drum weapon.