We built an arcade cabinet based on the designs by Chris Moyles as a large project in the Autumn term in 2012. We’ve detailed how we built it, and the software and hardware involved, to give you an idea as to how to build your own. The initial design was found at, (http://chris.polymathic.net/cabinet/CAB-Model.pdf) We changed the widths and a couple of the heights to make them more door friendly. We also adjusted a couple of things to allow for: the different thickness of plywood (1/2”) we were using, the caster wheel sizes (as the side and front panels work as skirts) and the control board design.

We first transferred the design to 3 sheets of 4’ x 8’ plywood. Each side of the cabinet was put on its own sheet of plywood and the spare on each sheet was used for the other panels (back, top, front etc.) To mark out we used the good edges of the plywood as much as possible and worked from there. The diagram below shows how we approached marking out the sides. Most of the other pieces are just rectangles based on the measurements of the sides.

We then cut out all of the pieces. To do this we mainly used a circular saw with a long piece of clamped metal as a guide; for the smaller corner pieces we used a jigsaw. For the sides, we clamped both sheets of plywood together and cut them at the same time. This saved marking out a second sheet of plywood and made sure both pieces were as identical as possible. As each piece was cut it was marked so that we knew what it was for. All pieces and edges were sanded down. To attach the pieces together we used 1”x1” ledgers. TinkerSoc members would work out the length of ledger required and cut these from a length of 1”x1” strip wood. These were glued where a joint was required and then countersunk screws were used to securely fasten each piece. A diagram is shown below.

Countersinking is where you drill a hole for a screw and then using a countersink drill bit so that the head of the screw can sit in the wood and run flush with the outside. We filled these holes and sanded the whole thing down for painting.

Construction took three nights. This was the usual format:

We went for a retro theme with this build.

Using a general purpose filler we filled in all the edges and joints, as well as the screw heads, and after leaving the filler to dry sanded the cabinet down. We used a tin of white primer which was used as the base coat and topcoat.. This was done by people volunteering between lectures in the Computer Science foyer, and the Architecture workshop, here at the University. Once the machine was primed, we designed and cut out some stencils with various well known retro game figures, like Mario and space invaders.

We began painting these in one of the TinkerSoc sessions while the monitor assembly was constructed, and it was also finished off by volunteers between lectures. We noticed people becoming increasingly interested in the machine at this point and had lots of fun explaining what it was and how it worked to passing staff and students. 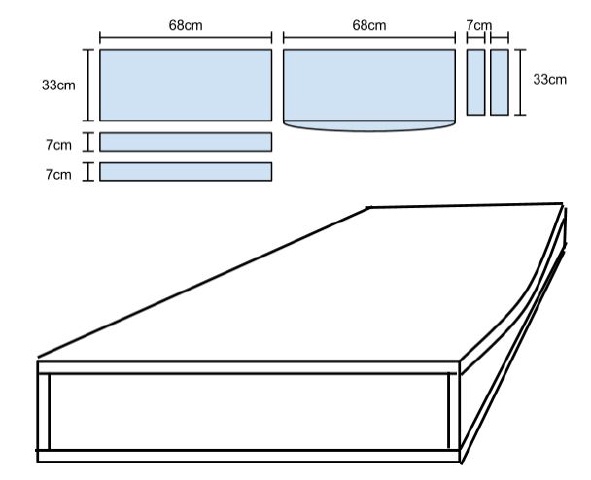 The control box is a simple box with the top pannel having a rounded lip.  A controler layout from http://www.slagcoin.com/joystick/layout.html was used, the exact one isn’t important.

2.b - Mounting the controls

For interfacing with the raspberry pi we used a joystick kit.  The buttons connect directly to this board using the wiring looms provided, and then the interface board connects to our Raspberry Pi with a usb cable. http://www.ultracabs.co.uk/usb-2-joystick--22-button-arcade-control-kit-71-p.asp

The donor screen was a 17 inch monitor from the CS department in the university. We disassembled it, to remove the plastic bezel and surround, and exposed the VESA mounts. Once we had done this, we had a bare panel to work with, and reframe into a piece of ply.

The appropriate sized hole was cut into the panel that would become the front of the machine, and we placed blocks around the screen to both provide vertical support for the screen and allow us to place a board across the back to screw through into the VESA mount, to give lateral support.

We carefully marked where each block would go, naming them corresponding to top bottom, left and right, and screwed each in place using screws which would both grip into the plywood front, and not be visible on the other side.

To get the 4 points that the VESA mount needed to be drilled into, we placed the monitor into the mount, and painted each of the 4 screw holes. We then pressed the back board onto the mounting bolts to get the location of each hole we needed to drill.

The Raspberry Pi that we are using is a rev.2 512Mb one (although we started out with a Rev.1 and this worked fine). The Pi is overclocked and less memory is given to the GPU (this is because many of the emulators we will be running can’t use GPU assistance). We did have an issue with the raspberry pi corrupting SD cards routinely; this problem is likely because of the overclock as only the root partition kept corrupting. To resolve this we decided to use the SD card solely as a boot loader.

To do this we first flashed the USB stick with a copy of Raspbian. Then we plugged in our SD card and edited cmdline.txt. Within this file there should be a parameter labeled ‘root = /dev/blah’ all we needed to do was to change this to ‘root = /dev/sda2’ (because parition two of the USB stick was raspbian’s root partition). Now when the Pi is turned on, the kernel will launch for the boot partition on the SD card and then everything else is loaded from the USB stick. This proved to be far more reliable and gave us the benefit that changes could be made by most TinkerSoc members without the need for a SD card reader.

The rest of the hardware setup is fairly standard. The Raspberry Pi has two USB ports. One has the arcade controller connected to it (appears as a single joystick out of the box) and the other runs up to a USB hub. This hub just has the new USB boot stick and a keyboard plugged in. The keyboard is just for maintenance use and is hidden inside the vast empty space of the cabinet.

RetroPi is an installation script that installs RetroArch. This makes it considerably easier to build various emulators for the machine with a nice frontend. The instructions for install are available here:

One important bit is although EmulationStation detects and asks us to configure the arcade controller on first launch, it does not do this for the emulators. Instead you use the program retroarch-joyconfig that was installed by retroPi to configure most of the emulators. retroarch-joyconfig -p 1 will guide you through what you need to do for the first player and retroarch-joyconfig -p 2 will help you for the second. You can just copy these down or use the -o option to output the config to a specified file. In our case we just used cat to put the configuration into /etc/retroarch.cfg. This is the file that needs your configuration output from retroarch-joyconfig. This provides the controls needed for most of the mame based programs. The only remaining emulator that we use was GnGeo. This needed another manual invention. To do this we fired up the emulator and hit f4 on our keyboard. This let us see the keycodes when keys were pressed. We did this for each of the arcade controllers buttons and noted this down. Within the folder .gngeo in the pi’s home directory is a file called ‘gngeorc’. This file was edited (in the joypad section) to reflect the correct keycodes for each button we wished to map.

ROMs are a very difficult area. Many companies have gone bust, but the copyright still exists. As this arcade machine is in an open public space at a university, we had to play things extremely safe. One of the main emulators that we use, Imame4All, has sites on the internet where you can download compatible roms. This emulator appears to be a much newer Mame version than AdvanceMame (also easily installable on the Pi) and this made finding roms easier. In regards to the Roms we only use ones from http://www.liberatedgames.com/ and others where the license clearly states that they are free to use; we also do not charge to use our arcade machine.

The Pi took a while to setup (compiling retroarch takes a while), so we quickly whipped the USB stick onto a Linux based laptop and ran dd if=/dev/sdb of=mameBackup.img (it is important that you make sure that you specify the right device). This gave us a backup image of the stick that we could use in case of any problems. Our USB stick is small so the image of it is also not very large. Backups like this can be useful if you really don’t want to mess around setting things up again (or future members don’t know how).